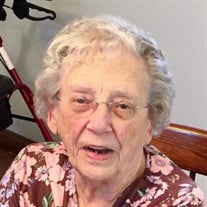 Erma (Meents) Janssen Steiner, 93, passed away on Wednesday, August 12, 2020. Formerly of Milford and Cissna Park, she was residing at the Iroquois Resident Home in Watseka when she was called to her heavenly home with prayers of her loved ones surrounding her. Erma was the sixth child of Fred and Marie (Classen) Meents, born on December 12, 1926. She was baptized at the home of her maternal grandparents prior to the funeral of her mother. She was raised by her eldest paternal aunt, Marie (John) Klumker. She married Edwin Janssen of Milford on March 14, 1948 at St. Paul’s Lutheran Church in Kankakee. He preceded her in death in 1981. To their marriage three children were born. Surviving are son, Wayne (Sue) Janssen of Watseka; daughter, Sharon (Charles) Crow of Danville; and daughter-in-law, Sara Janssen of Milford. Her son, Darrell Janssen preceded her in death in 2017. She is also survived by six grandchildren, Aimee (Greg) Robinson, Nathan (Heather) Janssen, Carmine (John) Dwyer, Jeanette (John) Conrad, Julie (Uzi) Ashkenazi, and Alex (Tara) Janssen. She has 12 great-grandchildren, 7 step-grandchildren, 10 step-great-grandchildren, and one step-sister, Lois (Jerry) Vogel. She married Raymond Steiner Sr. on July 31, 1988 at the Loda Lutheran Church in Loda. He preceded her in death in 2011. She is survived by two step-children, Sharon (Ray) Knake and Raymond (Lois) Steiner Jr. She was preceded in death by one step-daughter, Diane. Also preceding her in death were her brother, Wilfred (Marie) Meents and sisters, Mae, Ethel, Gertrude (Orval) Peters, Mildred (Vincent) Voigt, and Helen Burridge. Erma spent many years teaching Sunday School and VBS at Our Savior Lutheran Church in Milford. She looked forward to attending and volunteering at the Iroquois Co. Fair. She enjoyed square dancing and traveling. She spent hours crocheting, making sure each newborn grandchild received a special blanket, and that numerous church bazaars had a stock of her handiwork. Her faith was obvious as one could often hear her humming her favorite hymns. She knew hundreds of them as evidenced by the shelves of hymnals she collected and cross referenced. She was an avid reader. Visitation will be held from 12:00 pm until the 1:30 pm funeral service on Sunday, August 16, 2020 at Calvary Lutheran Church in Watseka. Interment will follow at Maple Grove Cemetery in Milford. In lieu of flowers, memorials may be made to Calvary Lutheran Church or Our Savior Lutheran Church. Arrangements are by the Knapp Funeral Home in Watseka. Please share a memory of Erma at knappfuneralhome.com.

Erma (Meents) Janssen Steiner, 93, passed away on Wednesday, August 12, 2020. Formerly of Milford and Cissna Park, she was residing at the Iroquois Resident Home in Watseka when she was called to her heavenly home with prayers of her loved... View Obituary & Service Information

The family of Erma M. Steiner created this Life Tributes page to make it easy to share your memories.

Send flowers to the Steiner family.