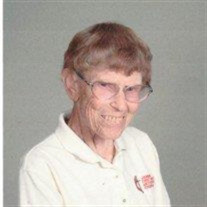 Elda Louise (Kaufman) Ruckrigel went to be with the Lord on September 18, 2020. She was born August 24, 1940 at her parents farm near Rankin, Illinois. Elda’s early schooling was at East Lynn, Illinois. She received a degree in education from Eastern Illinois University in Charleston, Illinois in 1958. her first teaching assignment was at Iroquois North School system in Iroquois County Illinois. Elda then moved to Freeport, Illinois, where she taught Home Economics at the Freeport Junior High School and Carl Sandburg Middle School until she retired in 1994. She was a member of Embury United Methodist Church in Freeport where she enjoyed singing with the chancel choir. While teaching at Carl Sandburg Middle School, Elda met and married Robert John Ruckrigel. They were married August 5, 1972 at the Embury United Methodist Church in Freeport. Elda and Bob shared a deep love of music and both sang in the chancel choir. Together, they enjoyed traveling and took several summer camping trips to Colorado and the Western states. They were members of the Holiday Rambler RV Club – the Chief Shabana Ramblers of northwestern Illinois as well as the Shawnee Ramblers of Southern Illinois. Both clubs have ceased to exist, but their activities meant a lot to both Elda and Bob. After retiring, Elda volunteered in the kindergarten departments at several of the Freeport area schools. Her volunteering continued until she and Bob moved to southern Illinois in 2000. At this point in her career, Elda volunteered in the kindergarten and first grade classes at the Cypress Grade School. During the winter months (December through March), Elda also volunteered at Mesquite Grade School in Casa Grande, Arizona. She and Bob sang in the church choirs at both the Vienna First United Methodist Church and at the United Methodist Church of Casa Grande. Elda loved her “kids” during her teaching career as well as her involvement in her church affiliations. She attended Sunday School while in Freeport, in Casa Grande, Arizona and in Vienna, Illinois. Church and her faith have always been an important part of Elda’s life. Elda’s parents, Mr. and Mrs. Frank Kaufman, preceded her in death. She is survived by: her husband – Robert “Bob” Ruckrigel; 2 sisters – Ruth (Jim) Abel of Indiana and Donna (Rich) Abbott of Crossville, Tennessee; a brother – Gary (Ann) Kaufman of Crossville, Tennessee; as well as several nieces and nephews in California and Ohio. A service honoring the life of Elda Kaufman Ruckrigel will be conducted Tuesday morning, September 22, 2020, at 11 AM at the Vienna First United Methodist Church, 301 North 4th St., Vienna, Illinois 62995. Pastor Timothy Gossett will officiate. A time of visitation for family and friends will be held Tuesday morning from 10 AM – 11 AM at the church. A graveside service will be held Wednesday morning, September 23, 2020, at 11 AM at Cissna Park Cemetery, located on East North Road, in Cissna Park, Illinois. Those attending the graveside service are invited to gather at the cemetery at 10:45 AM Wednesday. Memorials may be made to the Vienna First United Methodist Church, P.O. Box 1349, Vienna, Illinois 62995 or to the Christian Bible Church, PO Box 162, Cissna Park, Illinois 60924. Local arrangements by Knapp Funeral Home in Cissna Park. Please share a memory of Elda at www.knappfuneralhomes.com.

Elda Louise (Kaufman) Ruckrigel went to be with the Lord on September 18, 2020. She was born August 24, 1940 at her parents farm near Rankin, Illinois. Elda&#8217;s early schooling was at East Lynn, Illinois. She received a degree in education... View Obituary & Service Information

The family of Elda Louise Ruckrigel created this Life Tributes page to make it easy to share your memories.

Elda Louise (Kaufman) Ruckrigel went to be with the Lord on September...

Send flowers to the Ruckrigel family.