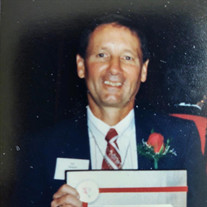 Edward M. Sennett, 76 of Homer Glen and formerly of Herscher, Clifton, and Johnsburg passed away on Tuesday January 11, 2022 at Loyola Medical Center in Maywood. He was born on April 24, 1945 in Broken Bow, NE a son of Lloyd and Vera (Heiser) Sennett. Ed married Carol Tucker and she preceded him in death in September 1969. He later married Lynn Blume in Oak Lawn and she survives. In addition to his wife Lynn, survivors include two daughters- Tami (Paul) Bronke of Normal and Tiffany (Brandon) Parker of Eudora, KS; four sons- Tim (Darla) Sennett of Lexington, Tom (Jamie) Sennett of Normal, Ty (Rachel) Sennett of Hayward, WI, and Tait (Anna) Sennett of Princeville; one sister- Jana (Steve) Zabel of Donovan; seventeen grandchildren and five great grandchildren. He was preceded in death by his parents and one daughter- Teri Sennett. Ed played minor league baseball with the California Angels affiliate including the Texas League and California League. He was the first All American baseball player in Illinois State University history (1965). Ed was coach of the year at least six times during his coaching career and was inducted into the Illinois Coaches Hall of Fame (2008). He took three teams to the state finals…one class A high school basketball team (Herscher High School); one class AA high school basketball team (Johnsburg High School); and one class A high school baseball team (Herscher) High School). He was a high school math teacher and coached basketball and baseball in Herscher and Johnsburg and basketball at Central High School in Clifton for 38 years. He was a member of the Illinois Basketball Coaches Association and the IEA and NEA Teachers Association. Funeral services will be on Tuesday January 18, 2022 at 10:00 am at the Knapp Funeral Home in Watseka with Pastor Paul Strand officiating. Visitation will be on Monday January 17, 2022 from 4-8 pm at the funeral home. Burial will be in the G.A.R. Cemetery in Watseka. Memorials may be made to St. Jude Children’s Hospital. Luncheon will immediately follow the burial at the Watseka Elks Lodge (111 N 3rd St, Watseka). Please share a memory of Ed at www.knappfuneralhomes.com.

Edward M. Sennett, 76 of Homer Glen and formerly of Herscher, Clifton, and Johnsburg passed away on Tuesday January 11, 2022 at Loyola Medical Center in Maywood. He was born on April 24, 1945 in Broken Bow, NE a son of Lloyd and Vera (Heiser)... View Obituary & Service Information

The family of Edward M. Sennett created this Life Tributes page to make it easy to share your memories.

Edward M. Sennett, 76 of Homer Glen and formerly of Herscher,...

Send flowers to the Sennett family.