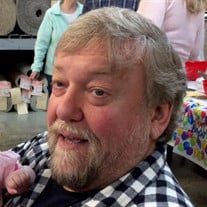 Edward Alan Koets, 64, of Ashkum passed away on Tuesday, March 16, 2021 at his home. He was born on March 4, 1957 in Watseka, the son of Almon and Rachel (Saxsma) Koets. He married Dawn Brinkman on August 4, 1979 in Ashkum and she survives. He is also survived by one daughter, Pamela Koets of Ashkum; one son, Robert (Molly) Koets of Ashkum; one granddaughter, Kamille Joy of Ashkum; sisters-in-law, Diane (Dennis) Poskin of Ashkum and Donna (Brent) Clark of Pontiac; brothers-in-law, Duane (Lori) Brinkman of Kentland, IN, Daryl Brinkman of Huntsville, AL, and Donald (Judy) Brinkman of Ashkum; and godson, Mark Chamness of Silver Springs, FL. He was preceded in death by his parents and infant sister, Rebecca Ellen. Ed was baptized at Danforth Reformed Church and his childhood was spent in Gilman. He worked for Reilly Ambulance Service, Shear Construction, Theesfeld Construction, and was a member of Carpenter’s Local #496. He enjoyed riding his motorcycle, detailing his cars, and drinking beer. He liked spending time with his family and friends. His favorite time was spent with his pride and joy, Kami. Visitation will be held on Friday, March 19, 2021 from 4:00 p.m. to 7:00 p.m. at Knapp Funeral Home in Clifton. A private graveside service will be held at a later date.

The family of Edward Alan Koets created this Life Tributes page to make it easy to share your memories.

Edward Alan Koets, 64, of Ashkum passed away on Tuesday, March...

Send flowers to the Koets family.