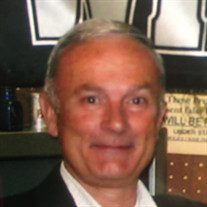 Edward “Ed” Jemar, 74 of Clifton passed away on Tuesday, October 13, 2020 at Amita Health St. Mary’s Hospital in Kankakee following a short illness. He was born in Kankakee on August 7, 1946, the son of Shirley W. and Josephine (Deny) Jemar. Mr. Jemar proudly served in the USMC in Vietnam from October 1967 until November 1968. He was in Bravo Co. 1st Bn. 3rd Division of the 9th Marines. He married Diane K. Alwine on November 5, 1966 at St. Joseph Catholic Church in Bradley and she survives. Also surviving are one daughter, Marissa (Mark) Anderson of Bourbonnais; four sons, Christopher (Kari) Jemar of Bourbonnais, Patrick (Erin) Jemar of Kankakee, Timothy (Heather) Jemar of Ashkum, and Joseph Jemar of Kankakee; eight grandchildren, Emily (Drew), Matthew, Ryan, Lyndsay, Kameryn, Sydney, Barret, and Evan; one sister, Rhonda (Stephen) Osborn of Frankfort; two sisters-in-law, Kary Westphal of Bourbonnais and Sue (Robert) Steen of Appleton, WI; and many nieces and nephews. He was preceded in death by his parents and one brother, Michael. Mr. Jemar was a graduate of the SIU Banking Institute and had worked at First National Bank of Clifton for 32 years. He was a long-time member of the Clifton Lions Club, and served with the Clifton Stars Youth Football and Clifton Little League Boards. For 25 years, he was a member of the Central High School Football chain gang. He was a board member of the KCC Manufacturing Technology Dept., and was a former member of the Knights of Columbus and Central Hospital Board of Directors. Ed was a long-time member of the Central VFW Post #2131 and a 51-year member of the Bradley American Legion Post #766, as well as a member of the Clifton Development Commission, serving on the Clifton Greenway Project. He enjoyed golfing, and playing shuffleboard and darts. He was a great supporter of the Central High School Athletics, and enjoyed being with his family and friends and attending all of his children’s and grandchildren’s sporting and school events. Private funeral services will be held on Friday, October 16, 2020 at St. Peters Catholic Church in Clifton. Fr. Vern Arseneau will officiate. Burial will follow at St. Peters Catholic Cemetery in Clifton with graveside military rites by the Bradley American Legion Post #766. Visitation will be held from 4:00 p.m. to 8:00 p.m. on Thursday, October 15, 2020 at Knapp Funeral Home in Clifton. The family requests those attending wear a mask and practice social distancing guidelines. Memorials may be made to the Eversight Center for Vision and the Bradley American Legion Post #766.

The family of Edward "Ed" Jemar created this Life Tributes page to make it easy to share your memories.

Edward “Ed” Jemar, 74 of Clifton passed away on Tuesday, October...

Send flowers to the Jemar family.