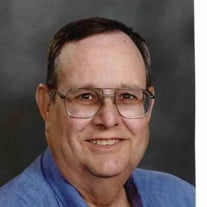 Ed Copher, 74, of Milford passed away on Tuesday, June 23, 2020 at Carle Foundation Hospital in Urbana. He was born July 29, 1945 in Louisiana, MO, the son of Lawrence Albert and Shirley Marie (Wright) Copher and they preceded him in death. He married Marcia Kay Larimore on September 25, 1965 at Akers Chapel Church of Christ in Hull, IL and she survives. Also surviving are three children, Dawn (Lyle) Garrelts of Fowler, IN, David (Holly Logsdon) Copher of Fowler, IN and Lance (Mindy) Copher of Milford; five grandchildren, Brock (Heidi) Garrelts of Fowler, IN, Jenna (Trenton) Fadness of Silverdale, WA, Salem and Logan Copher of Milford, and Kylee Senesac of Fowler, IN; one great-grandson, Gunner Garrelts of Fowler, IN; one brother, Richard Wayne (Sherry) Copher of Missouri; and several nieces, nephews and cousins. Mr. Copher served in the U.S. Army during Vietnam and was stationed in Germany. He was a patio brick salesman at Slon, Inc. in Fowler, IN for 30 years. Ed served in several capacities at the Milford Christian Church since 1982 and was on the committee of the NCEF (New Church Evangelizing Fund). He was an avid fan of the St. Louis Cardinals and Fighting Illini. Ed enjoyed the outdoors, especially fishing and hunting. He dearly loved his family and the Lord. Visitation will be from 1:00 p.m. until the 2:00 p.m. funeral service on Friday, June 26, 2020 at the Milford Christian Church. Rev. Brent Zastrow and Rev. Neil Larimore will officiate. Burial will follow at Sugar Creek Cemetery in Stockland with military graveside rites by the Watseka American Legion Post #23 and Iroquois County VFW Post #7450. In lieu of flowers, memorials may be made to the Milford Christian Church or International Disaster Emergency Services (IDES) P.O. Box 379, Noblesville, IN 46061-0379. Arrangements are by the Knapp Funeral Home in Milford. Please share a memory of Ed at knappfuneralhomes.com.

Ed Copher, 74, of Milford passed away on Tuesday, June 23, 2020 at Carle Foundation Hospital in Urbana. He was born July 29, 1945 in Louisiana, MO, the son of Lawrence Albert and Shirley Marie (Wright) Copher and they preceded him in death. He... View Obituary & Service Information

The family of Ed Copher created this Life Tributes page to make it easy to share your memories.

Send flowers to the Copher family.