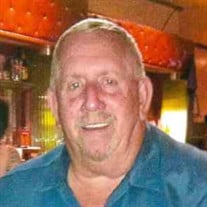 Duane F. “Mort” Regnier, 68, of Beaverville passed away on Thursday, May 12, 2022 at his home surrounded by his family. Mort was born August 24, 1953 in Kankakee, the son of Audrey “Mort” and Teresa (Finegan) Regnier and they preceded him in death in addition to one brother, Jim. Mort is survived by two sons, Josh (Lacey) Regnier of Bourbonnais and Morgan (Brandy) Regnier of Fort Benning, GA; one daughter, Jami (Keith) Willis of Clifton; eight grandchildren, Tyler, Blake, Kodie, Jordan, Delani, Theo, Ryker and Wrigley; two brothers, Jay (Diane) Regnier of Georgia and Darren (Cindy) Regnier of Fowler, IN; two sisters, Jill (Norman) Johnson of Donovan and Juanita Regnier of Watseka; many of his classmates from the Donovan Class of 1971; and several nieces and nephews, which he enjoyed watching grow up. Mort was a driver for Highway Transport. He was an avid bowler, having bowled two perfect games. He played softball for many years. He enjoyed watching his grandkids play sports at Clifton Central and was always ready to talk about his grandkids. Visitation will be from 9:00 a.m. until the 11:00 a.m. funeral service on Monday, May 16, 2022 at the Knapp Funeral Home in Watseka. Fr. Robert Bernotas will officiate. Burial will follow at St. Mary’s Cemetery in Beaverville. His grandchildren will be honorary pallbearers. Memorials may be made to Iroquois Memorial Hospice, Clifton Central Athletics or to the donor’s choice. Please share a memory of Mort at knappfuneralhomes.com.

The family of Duane F. Regnier created this Life Tributes page to make it easy to share your memories.

Duane F. “Mort” Regnier, 68, of Beaverville passed away on Thursday,...

Send flowers to the Regnier family.