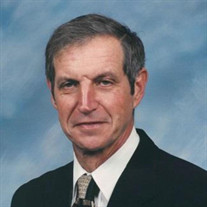 Duane W. Rascher, 75, of Cissna Park passed away on Saturday, March 20, 2021 at his home in Cissna Park. He was born on May 18, 1945 in Paxton, the son of Walter and Elsie (Dettmering) Rascher. He married Carlene Wilson on July 13, 2002 in Cissna Park. Surviving are his wife, Carlene Rascher of Cissna Park; seven step children, Stephanie (Bryan) Morman of Muncie, IL, Wayne (Theresa) Brazelton of Danville, Shannon Brazelton of Oakwood, Tim Colbert of Urbana, Kevin (fiancé Anne) Colbert of Fishers, IN, Jason (Hannah) Colbert of Spanish Fort, AL, and Jacob (Rachel) Wilson of Janesville, WI; one step son in law, Dave Mallek of Rosholt, WI; four sisters, Doris (George) Muench of Cissna Park, Elaine (Steve) Walther of Coon Rapids, MN, Donna Strawser of Gilman, IL, Ellen McLaughlin of Milford; seventeen step grandchildren; and many nieces and nephews. He was preceded in death by his parents and one step daughter, Dee Mallek. Duane served in the United States Army. He was a member of Trinity Lutheran Church in Cissna Park, where he served as an elder and was a past Commander of the Cissna Park American Legion Post #527. Mr. Rascher was an avid bowler, where he had scored a perfect 300 game and was a well-respected mechanic in the area. Funeral services will be at 11:00 am on Friday, March 26, 2021 at Trinity Lutheran Church in Cissna Park. Rev. Tim Hahn will officiate. Burial will follow at Trinity Lutheran Cemetery. Graveside military rites will be performed by Cissna Park American Legion Post #527. Visitation will be from 4:00-7:00 pm on Thursday, March 25, 2021 at Knapp Funeral Home in Cissna Park and one hour prior to the service at church on Friday. Memorials may be made to Trinity Lutheran Church or Cissna Park American Legion. Please share a memory of Duane at knappfuneralhomes.com.

The family of Duane W. Rascher created this Life Tributes page to make it easy to share your memories.

Duane W. Rascher, 75, of Cissna Park passed away on Saturday,...

Send flowers to the Rascher family.