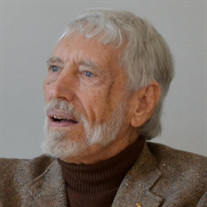 Duane Brooke Cultra, 95, of Onarga, passed away Monday, November 16th, 2020, at his home. He was born March 13, 1925 in Watseka to Archie James and Grace Greenwood (Brooke) Cultra. He married Mary Jane Teller on June 2, 1944 in St. Petersburg, Florida. They were married for 76 years. She survives. Also surviving are children Terence Patrick (Donna) Cultra of Paxton, Cynthia Jane (Douglas) Harford of Washington, Shane (Peg) Cultra of Onarga, Mary Melissa (James) Downey of Conway, Arkansas, also 16 grandchildren, and 30 great grandchildren. He was preceded in death by his parents, brothers, sisters, and by one daughter Lucinda Brooke (Alvin) Wilken. Duane was a senior in high school when WWII broke out. He was accepted into flight school and became a B17 pilot, flying 53 missions and sorties before being wounded by anti-aircraft flack-fire. After the war’s end, Duane attended the University of Illinois where he earned a degree in electrical engineering. Duane was president of the Onarga Nursery Company which was started by his grandfather Robert Cultra in 1865, the year he returned from service in the Civil War. The nursery continues to operate under the direction of Duane’s son Shane Cultra and his grandchildren Sayre Cultra and Lindsey Ishmiel. Duane’s love for flying carried over into his life. He loved to travel with his wife Jane in his Piper Commache and did so until his 80th birthday when he decided it was time to “hang it up.” As he grew older, he took great pleasure in the hymns he had learned as a child and would sometimes join in. He was a strong man with a loving, compassionate side. He was adored and admired by his wife and children and we look forward to seeing him again. Public gravesite rites were held in the Onarga Cemetery on November 23, 2020, Pastor Mark Crawford of the Onarga Methodist Church Officiating. Arrangements by Knapp Funeral Home in Onarga.

The family of Duane Brooke Cultra created this Life Tributes page to make it easy to share your memories.

Send flowers to the Cultra family.