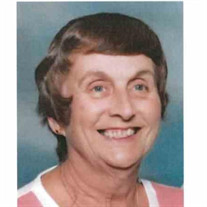 Dorothy Marie (Maul) Martin , 87, Woodland, passed away peacefully on Friday, July 17, 2020, at the Watseka Rehab & Health Care facility in Watseka, IL. She was born to John and Nettie (Lober) Maul on August 14, 1932, in Hoopeston, IL. Dorothy grew up on a small farm outside of East Lynn, IL where she later attended high school. She was raised in the Apostolic Christian Church of Cissna Park. She married Marvin Lee Martin on June 30, 1949, in Hoopeston. Soon after marrying, the family lived on a friend’s farm north of Watseka before moving to Woodland in the early 1950s where they lived for many years. Early in her life Dorothy worked at Corn Pack of Milford, as well as the Electronics and Condenser of Watseka. Later she became an Illinois Certified Nursing Assistant and Illinois Certified Emergency Medical Technician (EMT) working at both the Iroquois Memorial Resident Home and on the ambulance service from Iroquois Memorial Hospital of Watseka for several years. She was a life-long gardener. Many summer vacations she spent camping, boating, and water skiing with her family. Later in life, she and husband Marvin enjoyed the warm winters of central Florida with many friends. Dorothy was preceded in death by her husband Marvin, parents and step Mother Kathrine ‘Katie’ (Lober) Maul as well as her sister Wilma and brother Glenn. She is survived by her siblings-in-law William Martin of Ft. Collins, Colo., as well as Randy and Bonnie Martin, and Irene Maul of Hoopeston; daughter Patricia Rosenboom of Watseka; and sons Bruce Martin (Shelley) of Prescott, AZ and Dennis Martin (Karen) of Stillwater, Okla.; grandchildren Amy Picarella (Danny), Todd Harrison, Matthew Rosenboom (Heather), Elizabeth Sink (Doug), Morgan Martin-Kovari (Matthew); eight great-grandchildren; and several nieces, nephews, cousins, and friends. A graveside service will be held at 10 a.m. Saturday, July 25, 2020, at the cemetery of the Apostolic Christian Church outside of Cissna Park. Visitation will be one hour prior to the graveside service at the cemetery. Memorials may be made to the Apostolic Christian Church of Cissna Park, IL Arrangements are by the Knapp Funeral Home in Watseka. Please share a memory of Dorothy at www.knappfuneralhomes.com

The family of Dorothy Marie (Maul) Martin created this Life Tributes page to make it easy to share your memories.

Send flowers to the Martin family.