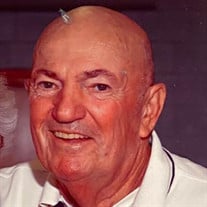 Donald L. McGuffin Sr., 86, of Clifton passed away Thursday, February 24, 2022 at Arcadia Care in Clifton. He was born February 18, 1936 in Kankakee, the son of Frank and Leta (Livingston) McGuffin and they preceded him in death in addition to one brother, Bill. He married Rita Jean Pedersen on October 3, 1964 in Dolton and she also preceded him in death on September 28, 2018. He is survived by three children, Susan Barnhart of Papineau, Donald L. (Sheri) McGuffin Jr. of Clifton and Mary (Roy) Brady of Manteno; nine grandchildren, Melissa (Tony), Russel, Lauren (Jamie), Benjamin (Ashley), Rita Jean (Ryan), Sarah, Michael (Ariana), Katie and Jonah; and fifteen great-grandchildren, Wesley, Alexis, Gabby, Alivia, Keyone, Warren, Raelynn, Jordan, Grayson, Liam, Carter, Lincoln, Kayden, Violet and Gwendolyn. Donald served in the U.S. Army during the Korean Conflict and was an M.P. on Wake Islands. He was a Pressure Tech. for Northern Illinois Gas Co. and was a bus driver for Midwest Transit. He was an active member of the Ashkum United Methodist Church, was a volunteer and Captain for the Homewood Fire Dept. Assoc., was a former secretary and treasurer for Clifton God’s Food Pantry, and was a member of the Slo Boys Tractor Club. He was active in Redbird Mission through church and Nomad Christian Mission. Donald enjoyed working on tractors, camping, traveling, dartball, and spending time with his family. A funeral service will be at 10:00 a.m. on Wednesday, March 2, 2022 at the Ashkum United Methodist Church with Pastor Barbara Schlatter officiating. A graveside service will be held at 1:00 p.m. at Abraham Lincoln National Cemetery in Elwood. Visitation will be from 4:00-8:00 p.m. on Tuesday, March 1, 2022 at the Knapp Funeral Home in Clifton. Memorials may be made to Clifton God’s Food Pantry. Please share a memory of Donald at knappfuneralhomes.com.

Donald L. McGuffin Sr., 86, of Clifton passed away Thursday, February 24, 2022 at Arcadia Care in Clifton. He was born February 18, 1936 in Kankakee, the son of Frank and Leta (Livingston) McGuffin and they preceded him in death in addition... View Obituary & Service Information

The family of Donald L. McGuffin Sr. created this Life Tributes page to make it easy to share your memories.

Send flowers to the McGuffin family.