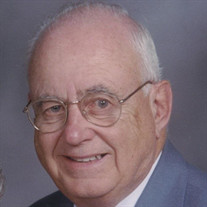 Donald V. Bozell, 90, of Watseka, IL passed away on January 10, 2015 at Heritage Health Retirement Village in Hoopeston. He was born on March 16, 1924 in Tipton, IN., the son of John and Lora VanBuskirk Bozell. He married Virginia Jordan in Elwood, IN. on June 27, 1948 and she survives. Also surviving are one son, Joe (Suzanne) Bozell of Knoxville, TN; one daughter, Connie (Larry) Hustedt of Martinton; six grandchildren, Christine (Tom) Vanover of Ballwin, MO., Casey Bozell (Tom Wiederrecht) of Portland, OR., Amanda Hustedt of Indianapolis, IN., Jacob Hustedt of Pune, India, Laura Hustedt of Indianapolis, IN., and Cassandra Hustedt of Martinton; and one great granddaughter, Emma Vanover of Ballwin, MO. He was preceded in death by both of his parents, one brother, Russell Bozell and one sister, Lois Beaty. Mr. Bozell was a member of the First Presbyterian Church in Canton, IL. He served in the United States Navy during World War II in the Pacific Theater. Donald was a member of the Watseka American Legion Post #23. He enjoyed traveling, gardening, and listening to jazz and swing music. Mr. Bozell had a love for all cars, antique and modern. His knowledge was endless when it came to these vehicles. Over the years, he was a store manager for three JC Penny stores in Neenah, WI., Huron, SD., and Canton, IL. Donald loved the Green Bay Packers, having attended the 1967 “Ice Bowl” in Green Bay, WI. Of all his great accomplishments, his love for family always came first. Funeral services will be held on Wednesday, January 14, 2015 at 11:00 am at the Knapp Funeral Home in Watseka with a one hour prior visitation at the funeral home. Rev. Marty Schoenleber will officiate the service. Burial will take place at a later date at the Oak Hill Cemetery in Watseka with graveside military rites by the Watseka American Legion Post #23 and Iroquois County VFW Post #7450. Memorials may be made to the Donald V. Bozell Memorial Fund. Please share a memory at www.knappfuneralhomes.com

Donald V. Bozell, 90, of Watseka, IL passed away on January 10, 2015 at Heritage Health Retirement Village in Hoopeston. He was born on March 16, 1924 in Tipton, IN., the son of John and Lora VanBuskirk Bozell. He married Virginia Jordan in... View Obituary & Service Information

The family of Donald V. Bozell created this Life Tributes page to make it easy to share your memories.

Send flowers to the Bozell family.