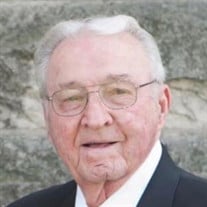 Dominic E. “Ditty” Lynch Jr, 91 of Watseka passed away on Sunday May 10, 2020 at Faith Place in Danforth. He was born on July 3, 1928 a son of Dominic E. and Mary Ellen Nally Lynch Sr. Ditty married Bonnie L. Scott in Macomb, IL on August 16, 1952 and she preceded him in death on February 17, 2018. Survivors include one son-Michael (Patti) Lynch of Kankakee; four daughters- Nancy Cowan of Watseka, Kathy (Joe) Kubal of Crest Hill, Chris (Kevin) Bossong of Watseka, and Jennifer (Mike) Dixon of Watseka; twelve grandchildren and seven great grandchildren. In addition to his wife, he was preceded in death by his parents and two brothers - John (Jack) Lynch and Patrick Martin Lynch. Ditty was a 1946 graduate of Watseka High School and a 1953 graduate of Western Illinois University, where he earned three varsity letters in football, was named First Team Defensive Player of the Year and was inducted into the Western IL University Football Hall of Fame in 1983. He served in the US Army during WWII in the 1st Infantry Division and was stationed in Bad Tolz, Germany. A lifetime citizen of Watseka, Ditty, along with his brother Jack, carried on his father’s business as the former owner, operator, and vice chairman of D.E. Lynch Construction Company, which later became Iroquois Paving Corporation. He also served as a two-time past President of the IL Asphalt Pavement Association and member of Associated General Contractors of Illinois. He was a devout member of St. Edmund Catholic Church, 4th degree Knights of Columbus, Sigma Tau Gamma Fraternity at Western IL University, Watseka Chamber of Commerce, Watseka Lions Club, Watseka American Legion, past exalted ruler of Watseka Elks Lodge No.1791 and a member of the Union League Club of Chicago. He was also a member of the Shewami Country Club, where in 1984, he was instrumental in helping to organize the construction of the back nine. Ditty was a recipient of the Western Illinois University Alumni Association Achievement Award, WCHS Athletic Achievement Award and the Sam Walton Business Leader Award. Despite his many successes in life, nothing brought Ditty more joy than his children, grandchildren and great-grandchildren. He especially enjoyed watching them participate in WCHS Athletics, and rarely missed a game or an event. Memorial visitation will be held on Saturday, August 15, 2020 from 10:00 a.m. - 11:00 a.m. at St. Edmund Catholic Church in Watseka. Private memorial services will follow with Fr. Michael Powell officiating. Burial will take place at Oak Hill Cemetery with graveside military rites by Watseka American Legion Post #23 and Iroquois County VFW Post #7450. In lieu of flowers, memorials may be made to the Western IL Athletic Association, Watseka Athletic Booster Club, St Edmund’s Catholic Church, Prairieview Lutheran Home, or Iroquois Memorial Hospice. Arrangements are by the Knapp Funeral Home in Watseka. The Family invites you to share a favorite memory or story of Ditty at www.knappfuneralhomes.com

The family of Dominic E. "Ditty" Lynch Jr. created this Life Tributes page to make it easy to share your memories.