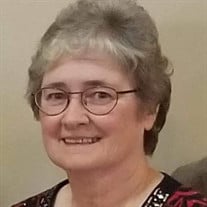 Diana L. Bowers, 72, of Chebanse passed away on Friday, July 2, 2021 at Northwestern Memorial Hospital in Chicago. She was born on March 15, 1949 in Kankakee, the daughter of Duane and Jennie (Sroka) Mathy. She married Kenneth J. Bowers on February 15, 1969 in Chebanse and he survives. Besides her husband Ken, she is survived by two sons, Duane Bowers of Clifton and Darin Bowers (Kerry Janesky) of Urbana; one daughter, Jill (Tim) Rieken of Clifton; nine grandchildren, Kaitlin, Mariah, Matthew, and Jenna Bowers, Mariana and Dylan Rieken, Zoe, Jade and Kate Bowers; one great-grandchild, Sylvia Rieken; two sisters, Karen (Hap) Billingsley, Janis (Richard) Buss, and one brother, Mike (Dawn) Mathy, all of Chebanse; three sister-in-laws, Rita (Roger) West, Marilyn Gorun, Patricia Moore; one brother-in-law, Robert Bowers; one aunt Dorothy Riebe, and many nieces, nephews and cousins. Diana graduated from Clifton Central High School in 1967. She retired after being an Executive Secretary at Gould National Battery in Kankakee for over 27 years. She was a member of Sts. Mary & Joseph Catholic Church in Chebanse. Diana was the vice president of the Clifton Community Food Pantry and served on the board for over 18 years. Diana was also a member of the Chebanse Community Building board. She loved spending time with family and friends, and especially her children and grandchildren. She was a lifelong Chicago Cubs fan, loved to watch PGA golf, enjoyed bowling, playing cards and travel. She was preceded in death by her parents, along with one sister, Linda Mathy, and one brother-in-law, Joel Gorun. Visitation will be on Wednesday, July 7, 2021 from 4pm-7pm at Knapp Funeral Home in Clifton. Funeral Mass will be at 10am on Thursday, July 8, 2021 at Sts. Mary & Joseph Catholic Church in Chebanse with Fr. Doug Hauber officiating. Private graveside services will be held at Abraham Lincoln National Cemetery in Elwood at a later date. Memorials may be made to Clifton Community Food Pantry or Family Wishes.

Diana L. Bowers, 72, of Chebanse passed away on Friday, July 2, 2021 at Northwestern Memorial Hospital in Chicago. She was born on March 15, 1949 in Kankakee, the daughter of Duane and Jennie (Sroka) Mathy. She married Kenneth J. Bowers on... View Obituary & Service Information

The family of Diana L. Bowers created this Life Tributes page to make it easy to share your memories.

Send flowers to the Bowers family.