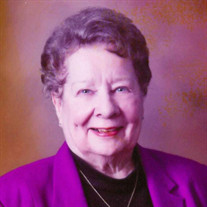 Della Mae Bork, 98, of Piper City passed away peacefully at 12:02 p.m. on Sunday, February 14, 2021 at the Piper city Rehab and Living Center. Della was born on March 24, 1922, a daughter of Roy and Verna C. (Umbarger) Stiner in Roberts, Illinois. She married Harold F. Bork on September 21, 1941 at the Presbyterian Church in Piper City. He preceded her in death on October 30, 2002. Della is survived by her children, Gene (Pamela) of Thawville, Alice (David) Monk of Danforth, Ronald (Celia) of Piper City, Wayne (Karen) of Hendersonville, NC and Betty (Ronald) Henson of Bonita Springs, FL; fifteen grandchildren; seventeen great-grandchildren; and four great-great-grandchildren. Along with her husband, she was preceded in death by her parents, a sister Myrtle, a brother Walter and a great-granddaughter. After joining the Presbyterian Church in 1941, she was an active member serving as an elected Elder, held many positions in the Women’s Association including President, and taught Sunday School. Della was an active volunteer for many organizations including the Brenton Homemakers Extension, Ford County Tuberculosis Association, Mid-Eastern Lung Association, Ford County Red Cross, Ford County Republican Women, and SHOW Bus. She worked diligently in various capacities to get the Greenbrier nursing home funded and built in Piper City. After raising five children and because of her community service, Della was honored by the Illinois Mothers Association of the American Mothers Inc. when she was selected as the Illinois Mother of the Year in 1979. Della was interested in weather and served as a National Weather Observer from 1968-1983, a WCIA TV weather observer, and was the subject of a feature article in Farm Wife News on “Weather Observing”. Della was a member of the Governor Thomas Ford Chapter of the National Society Daughters of the American Revolution, the Piper City Community Historical Society, and the Ford County Historical Society. A memorial service will be on Sunday, July 18, 2021 at 2:00 pm at First Presbyterian Church of Piper City. Memorials may be made to Iroquois Memorial Hospice, Piper City Rehab and Living Center, or First Presbyterian Church of Piper City. The Knapp-Redenius Funeral Home in Gilman is in charge of arrangements.

The family of Della Mae Bork created this Life Tributes page to make it easy to share your memories.

Send flowers to the Bork family.