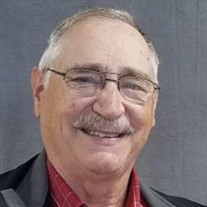 David A. Perzee, 80, of Gilman passed away on January 9, 2021 at Advent Health Sebring in Sebring, FL. He was born on September 29, 1940 in Gilman, the son of Ralph and Bernice (Saxsma) Perzee. He married Marilyn F. Juergens at Cabery United Methodist Church on April 10, 1965. Surviving are his wife of nearly 56 years, Marilyn (Juergens) Perzee of Gilman; two daughters, Michele (Luis) Torres of Westmont, IL and Marcia (Steven) Davage of Hamilton, MI; four grandchildren, Benjamin and Daniel Davage and Andrea and Matthew Torres; three sisters, Norma (Ronald) Koerner of Chatsworth, Linda (Roger) Zehr of Flanagan, and Effie (Paul) Moore of Bourbonnais. He was preceded in death by his parents; father and mother in law, Herman and Gussie (Zeedyk) Juergens; three brothers, Leroy, Gerald, and Peter; two brothers in law, George Juergens and Donald Juergens; and four sisters in law, Patti Perzee, Brenda Perzee, Marilyn Juergens, and Nancy Juergens. Mr. Perzee served three years in the United States Army with the Army Security Agency. He was a longtime member of the Danforth American Legion Post #367 and served as commander for 25 years. David was a lifelong member of Danforth Reformed Church in Danforth, where he served as Elder, Deacon, Sunday School Superintendent, organized and helped with the start of DRC Vacation Bible School and he and his wife prepared senior dinners for many years at the Church. David worked at The Gilman Star in Gilman during high school and before going into the military. He retired from Uarco/Standard Register Watseka after 36 years. Dave enjoyed attending his children’s and grandchildren’s school events. He was their biggest cheerleader and a wonderful role model who was always encouraging. He looked forward to his coffee times with his many friends in Illinois and Florida. He and Marilyn loved to travel and did many trips including The Netherlands to find out where their families began. He made friends everywhere he went, took care of many, and was always available if needed. He was a wonderful husband, father, grandfather, uncle, cousin, friend, and neighbor. He will be missed deeply. A celebration of life service will be held at 1:00 pm on Friday, June 18, 2021 at Danforth Reformed Church in Danforth. Pastor Donald J. MacDonald III will officiate. Visitation will be from 11:30-1:00 pm, also at church. Burial will follow at Danforth Reformed Cemetery with graveside military rites by Danforth American Legion. Arrangements are being handled by Knapp-Redenius Funeral Home in Gilman. Memorials may be made to Danforth Reformed Church. Please share a memory of David at knappfuneralhomes.com.

David A. Perzee, 80, of Gilman passed away on January 9, 2021 at Advent Health Sebring in Sebring, FL. He was born on September 29, 1940 in Gilman, the son of Ralph and Bernice (Saxsma) Perzee. He married Marilyn F. Juergens at Cabery United... View Obituary & Service Information

The family of David A. Perzee created this Life Tributes page to make it easy to share your memories.

Send flowers to the Perzee family.