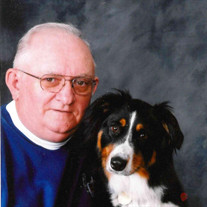 Darrell Gene Niswander, 80, of Watseka passed away on Tuesday, February 2, 2021 at Carle Foundation Hospital in Urbana. He was born on January 24, 1941 in Roberts, the son of Glen O. and Eldrid (Oldridge) Niswander. He married Tondra Mann on October 16, 1999 in Milford and she survives. He is also survived by one son, Glen David Niswander of Decatur; three grandchildren, Joshua Alan Niswander of Walton, KY, Paige Marie (Corey) Jenkins of Portland, TN, and John Wesley Niswander of Portland, TN; two great-grandchildren, Zoie Leigh Ann Jenkins and Eliza Grace Jenkins, both of Portland, TN; one sister, Ruth Ellen (Charles) Roque of Gibson City; three sisters-in-law, Ginny Mann of Danville, Sandra Christensen of Guthrie, OK, and Minta Jean Carpenter of Jeffersonville, IN; and nieces and nephews, Jessica Vick of Everton, MO, George Christensen of Edmond, OK, Ashley (Dustin) Simpson of Republic, MO, Dylan Urtado of Everton, MO, PFC Nicolas Christensen of Okinawa, Japan, Briley Christensen of Edmond, OK; Justin (Taylor) Christensen of Guthrie, OK; and many other nieces, nephews, and cousins. Darrell was preceded in death by his parents; nephew, Darwin Humphrey; brother-in-law, Jack Mann; and several aunts and uncles, including his special aunt, Ruth Oldridge Kanosky. Mr. Niswander was a member of the Milford Christian Church, where he was a deacon for three years. He was also in a bowling league and was a member of Oida Truckers Association. He enjoyed gardening, growing wildflowers to watch birds that came to them, and growing pumpkins that he would put at the end of the lane for others to enjoy. He also enjoyed watching NASCAR races, attending a few and taking his grandson, nieces, and nephews. Darrell drove a semi for over 50 years, at one point owning his own. He traveled cross country in semis, one of his favorite places being Napa Valley, CA. He retired from R.C. Transport out of Stickney and after retirement, worked one fall for Gordon Seggebruch hauling grain. Darrell met a lot of friends whom he kept up with through semi driving. He could often be found at his home away from home, K&H Truck Plaza, having coffee with friends. A very special thank you to Jo Ann and the Herscher crew, Dennis, John, and Josh, for taking good care of him. Most of all, he loved his family and his four-legged children, as he called them. Visitation will be held on Wednesday, February 10, 2021 from 10:00 a.m. until the 12:00 p.m. funeral service at the Milford Christian Church. Rev. Brent Zastrow, Rev. Neil Larimore and Rev. Gary Milton will officiate. Burial will follow at Onarga Cemetery. Wearing masks will be required. Arrangements by Knapp Funeral Home in Watseka. Memorials may be made to family’s wishes. Please share a memory of Darrell at knappfuneralhomes.com.

Darrell Gene Niswander, 80, of Watseka passed away on Tuesday, February 2, 2021 at Carle Foundation Hospital in Urbana. He was born on January 24, 1941 in Roberts, the son of Glen O. and Eldrid (Oldridge) Niswander. He married Tondra Mann... View Obituary & Service Information

The family of Darrell Gene Niswander created this Life Tributes page to make it easy to share your memories.

Darrell Gene Niswander, 80, of Watseka passed away on Tuesday,...

Send flowers to the Niswander family.