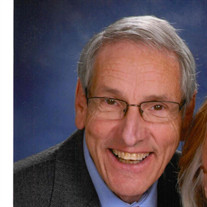 Daniel David Cluver, 74, of Watseka passed away on Saturday, November 20, 2021 at his home. He was born on July 26, 1947 in Watseka, the son of Paul and Jeanette (Nielsen) Cluver. He married Ellen Stole in Lansing, Illinois on June 15, 1974. She preceded him in death on August 3, 2021. Dan was also preceded in death by his parents and one infant daughter. Dan is survived by one daughter, Jan (Justin) Lavicka of Milford; one son, David (Amber) Cluver of St. Joseph; seven grandchildren, Jahni, Jossalin, Jackson and Jaylin Lavicka and Henry, Elsa, and George Cluver; one brother, Steve (Karen) Cluver of Boulder City, NV; one sister, Paulette (Jim) Harkins of Gilman; and several cousins, nieces, and nephews. In high school, Dan played football, basketball, baseball, and ran track at WCHS. He was also involved in band, choir, and the yearbook committee. Dan served in the United States Army during the Vietnam War. Later, he attended Concordia University where he received both his undergraduate and Master’s degrees. Dan was a principal and teacher in the Lutheran Church Missouri Synod school system for 38 years. Dan loved watching football, basketball and baseball; particularly the University of Illinois, Chicago Bears, and Chicago White Sox. Visitation will be held from 9:00 a.m. until the 12:00 p.m. funeral service on Tuesday, November 30, 2021 at Calvary Lutheran Church in Watseka. Rev. Aaron Uphoff will officiate. Burial will follow at Oak Hill Cemetery in Watseka with graveside military rites by Watseka American Legion Post #23 and Iroquois County VFW Post #7450. Arrangements by Knapp Funeral Home in Watseka. Memorials may be made to Iroquois Memorial Hospice or Calvary Lutheran Church in Watseka. Please share a memory of Daniel at www.knappfuneralhomes.com.

The family of Daniel David Cluver created this Life Tributes page to make it easy to share your memories.

Daniel David Cluver, 74, of Watseka passed away on Saturday,...

Send flowers to the Cluver family.