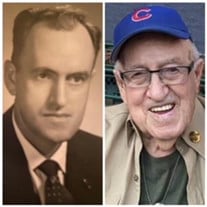 Corliss Lee Norton of Clifton passed away peacefully at home on Saturday, November 27th, surrounded by his family and loving wife of 73 years, Irene. His 100th birthday would have been December 14th. He was born in Kewanee Illinois and raised on a farm by his parents Raymond and Marie. He graduated from Mineral High School in 1938, one of only four in his class. He completed his undergraduate work at Illinois State University and received his Master’s degree from the University of Illinois. He enlisted in the U.S. Army Air Force at the start of World War II. He was a tail gunner, and completed 39 missions. He was one of 4 survivors of a ditching over the Adriatic Sea on July 15, 1944, earning a Purple Heart and Bronze Medal. When he returned home, he concluded his college studies and met the love of his life, Irene Lehner, in Bloomington. They married in Sheldon, IL on June 5, 1948. They moved to Buckley, where he began his career of teaching history and coaching basketball (110-17). He moved to Clifton Central in 1951 where he was a teacher, coach, guidance counselor, junior high principal, and eventually Superintendent of Schools. As a high school basketball coach, he won 301 games in 15 years. He was inducted into the Illinois Basketball Coaches Association Hall of Fame in 2012. After retirement, he and Irene split their time between homes in Scottsdale, Arizona and Clifton for over 30 years. Corliss was an active member for many years of the Clifton Lions Club and the Ashkum Methodist Church. He was a lifelong Chicago Cubs fan, and he and Irene were honored for their military service at Wrigley Field in August, 2019, He had a mind as sharp as a tack, even at the age of 99. He could recite the stats of most college and pro players, and was an avid sports fan. He was a modest man with a quick wit. He took a quiet pride in his family and enjoyed staying in touch with neighbors, friends, colleagues, and even his original B24 crew. His Christmas letters usually contained a zinger or two, and were highly anticipated. He is survived by his lovely wife Irene, daughter Rita (Stephen) Fontinha, son Herb (Barbara), daughter Toni (Jack) Schimanski, son Ted (Pam), and daughter Kim (Ken) Hasanoff. As well as six grandchildren and eight great grandchildren and sister, Vernalee McNamara. Preceding him in death were his parents and son Tom. Funeral services will be at 11:00 am on Saturday, December 4, 2021 at Ashkum United Methodist Church in Ashkum. Rev. Barb Schlatter will officiate. Burial will follow in Clifton Cemetery in Clifton. Military rites will be provided by Central VFW Post #2131. Visitation will be from 4:00-7:00 pm on Friday, December 3, 2021 at Knapp Funeral Home in Clifton. Memorials may be made to the Family’s Wishes. Please share a memory of Corliss at knappfuneralhomes.com.

Corliss Lee Norton of Clifton passed away peacefully at home on Saturday, November 27th, surrounded by his family and loving wife of 73 years, Irene. His 100th birthday would have been December 14th. He was born in Kewanee Illinois and raised... View Obituary & Service Information

The family of Corliss L. Norton created this Life Tributes page to make it easy to share your memories.

Corliss Lee Norton of Clifton passed away peacefully at home...

Send flowers to the Norton family.