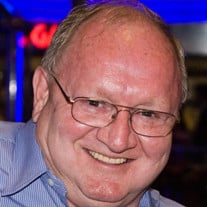 Clarence Otis “Butch” Kincade, 77, of Lake Zurich and formerly of Herscher passed away on Saturday, August 7, 2021 at Advocate Good Shepherd Hospital in Barrington. Butch was born on July 19, 1944 in Watseka, the son of Harold Otis and Jennetta Ione (Michels) Kincade and they preceded him in death. He married Laura Ann Coyne on October 2, 1970 in Watseka and she preceded him in death on April 3, 2014. He was also preceded in death by one half-brother, Louis Eugene “Sonny” Hastings; and two half-sisters, Mardelle (Hastings) Maltman, and Gerry (Price) Corvillion. He is survived by one daughter, Angie (Don) Reid of Kempton; one son, Nick (Melissa) Kincade of Lake Zurich; five grandchildren, Aaron and Blake Reid and Austin, Emily, and Lauren Kincade; his dog, Snookums; and his special kids, Brian and LeAnne as well as many many other kids from the years of daycare with his wife. Butch was a dedicated hard worker that worked for Natural Gas Pipeline/Kinder Morgan for 47 years.  He enjoyed fishing, fried chicken, Coke Zero (he switched from Pepsi later in life), and couldn't pass up a raffle.  He loved all things dirt track racing, NASCAR, and Dale Earnhardt Sr. and was also known to tell a story or two. A memorial visitation will be held for both Butch and Ann Kincade from 10:00 a.m. – 12:00 p.m. on Saturday, August 28, 2021 at Knapp Funeral Home in Onarga. Burial will be at Onarga Cemetery immediately after the visitation with graveside military rites by Onarga American Legion Post #551. A meal will follow at the Onarga American Legion building. In lieu of flowers, memorials may be made to Onarga American Legion Post #551 or American Diabetes Association.

Clarence Otis &#8220;Butch&#8221; Kincade, 77, of Lake Zurich and formerly of Herscher passed away on Saturday, August 7, 2021 at Advocate Good Shepherd Hospital in Barrington. Butch was born on July 19, 1944 in Watseka, the son of Harold Otis... View Obituary & Service Information

The family of Clarence "Butch" Kincade created this Life Tributes page to make it easy to share your memories.

Send flowers to the Kincade family.