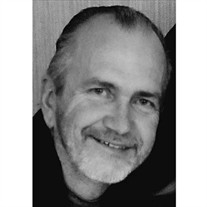 Charles “Chuck” Elliot, 58, of Chebanse, passed away Tuesday, June 2, 2020 in his home surrounded by his loving family. He was born November 13, 1961, in Kankakee at St Mary’s Hospital, the son of Mary (Deany) and William Elliot. Chuck married Rebecca “Becky” Elliot, the love of his life, on August 14, 2016, in Chebanse over home plate at the softball field where their story began. Chuck was a graduate of Kankakee Community College, specializing in computer technology. He held the title of IT Director for many years and led a successful career with computers. He was always ready and willing to assist family and friends whether over the phone or in person, day or night, weekend or holiday. He was also involved with his community and served as treasurer for the Village of Chebanse. He loved to sing. You could give him any random word and he’d name a song about it and even sing you a few verses. He sang at the church for many years with his dear friend, Carolyn, and in his later years, would sing in the car and at home to Rebecca and his kids. This man was born to play sports. He was a young, talented baseball player who later became the go to for many men’s slow pitch softball teams as their pitcher. He could aim that ball anywhere he wanted. After having children, he became a beloved coach of many years for Chebanse’s summer baseball and softball teams. He loved each of his players like his own kids and always pushed them to do their best. Rain, snow, sleet or shine, you could always find him out on the golf course. He jumped at any opportunity to play with friends or in tournaments and would often return with prizes or in his words “wads” of cash. There wasn’t much he wasn’t good at or could not do. His neighbors often woke to freshly plowed driveways after a snowfall or had assistance mowing or trimming their yard. He never looked for a thank you, he just did it to take a little off their plate. If he could help someone he knew, he would, no matter the cost, the hours, the sweat or the amount of tinkering it took to fix. He loved his many friends he made over the years, as well as his softball and golf family. He constantly reminded Rebecca of his love for her and always reminded his kids that he loved them ‘more than anything in the world, all the way to the moon and back and beyond’. He made sure everyone in his family knew how much he loved them at all times. He also gave the best hugs which he lovingly passed on to his children. There will forever be a missing piece to our family’s puzzle that only he was able to fill. Surviving is his loving wife, Rebecca Elliot of Chebanse, his daughters, Nicole Elliot (Kasey Duchene) of Kankakee, Sarah Elliot (Daniel Gross) of Clifton, Laura Elliot of Kankakee, Mandy Ledoux (Matt Szalmasagi) of Bourbonnais, Mary Ledoux of Chebanse, Jenny Ledoux (Kody Kristian) of Lafayette, his son Gavin Hargrave of Chebanse, Dalton Hargrave of Gunter, TX who holds a special place in his heart, and three grandchildren, Gregory Gross, Kayne Duchene and Odin Duchene, his mother, Mary (Deany) Elliot of Chebanse, his siblings, Betty DuVall, Larry (Donna) Elliot, Bev (Dick) Benge, Randy (Linda) Elliot, all of Chebanse, and sister in law Dee Elliot of Mount Vernon. He was preceded in death by his father William “Bill” Elliot, his brother Dennis Elliot, his brother in law Jim DuVall, as well as some very cherished friends. Cremation rites have been accorded by the Knapp Funeral Home in Clifton. A memorial service will be announced at a later date. Please share a memory of Chuck at knappfuneralhomes.com.

The family of Charles Elliot created this Life Tributes page to make it easy to share your memories.

Customized sympathy cards. Mailed for you.