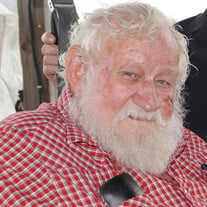 Calvin “Cal” Duane Bauer, 82, of Cissna Park passed away on Tuesday, June 22, 2021 at Iroquois Memorial Hospital in Watseka. He was born on July 1, 1938 in Cissna Park, the son of Harry W. and Mattie M. (Beer) Bauer. Cal married Rachel Knepp in El Paso, IL on July 14, 1960. He is survived by their four children, Tim (Melanie) Bauer of Melvin, Pamela (James) Nguyen of Goleta, CA, Penny (Terry) Sims of Phoenix, AZ, and Tyler Bauer (Judson Vosburg) of Chicago; nine grandchildren; three great-grandchildren; two sisters, JoAnn Hartman of Bloomington and Madalyn (Dale) Seggebruch of Onarga; two brothers, Glen (Susan) Hodel of Heyworth and Lowell (Lonnie) Bauer of Cissna Park. He was preceded in death by his parents and two brothers, William and Leslie Bauer. Cal served in the U.S. Army in Panama. He was a lifelong farmer and Cubs fan. He served his community of Cissna Park as a member of the American Legion Post #527, a fireman, a 4-H leader, and on the Co-Op board. Funeral services will be at 12:30 pm on Monday, June 28, 2021 at Christian Bible Church in Cissna Park. Burial will follow in Cissna Park Cemetery with graveside military rites by Cissna Park American Legion Post #527. Visitation will be from 10:00 a.m. -12:00 p.m. on Monday, June 28, 2021 prior to the funeral service at Christian Bible Church. Memorials may be made to Iroquois Memorial Hospice or Cissna Park American Legion Post #527. Arrangements by Knapp Funeral Home in Cissna Park.

The family of Calvin Duane Bauer created this Life Tributes page to make it easy to share your memories.

Send flowers to the Bauer family.