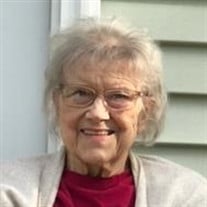 Beulah M. Reed, 84, passed away on Tuesday, November 24, 2020 at home surrounded by her loving family. She was born on October 17, 1936, the daughter of Ben and Margaret (Heur) Zbinden. She lived her entire life in the home where she passed and was very passionate about the house and the beautiful flower gardens. Beulah’s two daughters were wonderful caregivers to their mother, as well as the grandchildren, nieces and nephews. Beulah married Charlie Ford Reed on October 19, 1958 in Watseka, Illinois and he preceded her in death June 2, 1986. She was also preceded in death by one daughter Julie Parsons, April 14, 2010, her parents, five sisters and one brother. Surviving are two daughters, Lisa and Darryl Focken, and Dawn and Stuart Anderson all of Cissna Park. Son-In-Law and Daughter-In-Law, Dr. Steven and Debbie Parsons of Gibson City. Grandchildren, Lacey and Ben Dreyer, London and Bradley Most, Payton Focken, Macy and Trace Coleman, Reed and Jessica Anderson, Beau Anderson, Noah Anderson, Jeramy and Chrissy Parson, Andrew and Angie Parsons, Tony and Rachel Parsons and 10 Great Grandchildren. Also surviving are two brothers, Ray Zbinden of Aroma Park, Daniel Zbinden of Cissna Park, many nieces and nephews and a host of dear friends. She was a long time member of the Cissna Park United Methodist Church, serving as past Sunday School Teacher, leader of the United Methodist Youth Fellowship, President of the United Methodist Women and financial secretary for forty-eight years. Served on the Board of Directors for Country Theatre Workshop for thirty-eight years and also served as Treasurer. She also worked for thirty years at the Cissna Park State Bank. Beulah was an author of a book “Sweet Home Cissna Park”, co-chairman of Pigeon Grove United Fund Drive for several years. She was best known for her famous birthday, wedding and graduation cakes and her delicious meals and deserts. Beulah enjoyed any time she could spend with her family and friends. She always cherished time with her grand and great grandchildren. Words to live by, Ephesians 4:29. Let everything you say be good and helpful, so that your words will be an encouragement to those who hear them. Be the person that makes others feel special. Be known for your kindness and grace. A celebration of life will be held on Friday, July 9, 2021 at 6:00 p.m. at 104 Harrison Ave. in Cissna Park. Ashley Clifton and Ben Dreyer will officiate. A visiting hour will be held from 5:00 p.m. until the start of the service. Burial was held at Cissna Park Cemetery. Memorials may be made to the Cissna Park United Methodist Church, Iroquois Memorial Hospice or Country Theatre Workshop. Arrangements are by the Knapp Funeral Home in Cissna Park. Please share a memory of Beulah at knappfuneralhomes.com.

Beulah M. Reed, 84, passed away on Tuesday, November 24, 2020 at home surrounded by her loving family. She was born on October 17, 1936, the daughter of Ben and Margaret (Heur) Zbinden. She lived her entire life in the home where she passed... View Obituary & Service Information

The family of Beulah M. Reed created this Life Tributes page to make it easy to share your memories.

Send flowers to the Reed family.