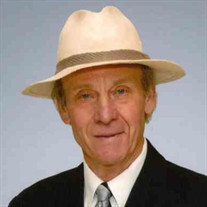 Arlyn W. Rabideau, 85, of Clifton passed away peacefully at his home on October 29, 2021 surrounded by his loving family. He was born in Kankakee on June 11, 1936 to Alvin and Evelyn (Kurtenbach) Rabideau. He married Jackie Lamie on January 10, 1959 and together raised their three children in Bonfield and then later in Clifton. Arlyn’s life was spent as a caring husband, father, grandfather, cattleman and educator. He studied agriculture and animal science at the University of Illinois, leading to a lifelong love of cattle breeding. Arlyn was always active, often taking a leadership role, as a member of the Illinois Hereford Association. As an educator, he was a teacher, then principal at St. Pat’s Grade School over the course of 14 years. With a Master’s degree from Olivet Nazarene University, and later his Doctorate degree from the University of Illinois in 1993. He served as principal at Clifton Central High School for 22 years. It was important to him to build relationships with his students and teachers and always being ever present at school events, making sure teachers and students knew he cared. Arlyn was an active member of St. John the Baptist Catholic Church in L’Erable for over 40 years. He is survived by his wife, Jacqueline Rabideau of 63 years and their children, Arlynda (Morgan) Ruch of Dallas, TX, Rod Rabideau of Denver, CO and Craig (Anne) Rabideau of Bourbonnais. He loved his six grandchildren, Abbie (Chris) Perry, Brittany (Matt) Ferguson, Brook Bailey, Preston Bailey, Alyssa (Jesus) Bailey and Marek Rabideau along with his five great-grandchildren, Landon & Laikyn Perry, Eleanor & Jacqueline Ferguson and Eden Llanas. He was preceded in death by his parents, Alvin & Evelyn Rabideau. A visitation will be held from 4:00-8:00 p.m. on Friday, November 5, 2021 at the Knapp Funeral Home (415 N. Main St., Clifton, IL 60927). A funeral mass will be held on Saturday, November 6, 2021 at 10:00 a.m. at St. John the Baptist Catholic Church in L’Erable. Burial will follow at St. John the Baptist Catholic Cemetery in L’Erable. Contributions will be given to the Clifton High School, where he dedicated much of his time. Please share a memory of Arlyn at knappfuneralhomes.com.

Arlyn W. Rabideau, 85, of Clifton passed away peacefully at his home on October 29, 2021 surrounded by his loving family. He was born in Kankakee on June 11, 1936 to Alvin and Evelyn (Kurtenbach) Rabideau. He married Jackie Lamie on January... View Obituary & Service Information

The family of Arlyn W. Rabideau created this Life Tributes page to make it easy to share your memories.

Arlyn W. Rabideau, 85, of Clifton passed away peacefully at his...

Send flowers to the Rabideau family.