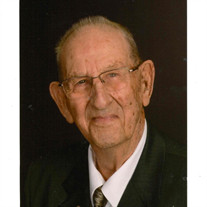 Allen J. Carley, 101 of Danforth and formerly of Milford passed away on Sunday June 27, 2021 at Prairieview Lutheran Home in Danforth. He was born on June 2, 1920 in Crescent Twp., a son of Adam J. and Ollie C. Smith Carley. Allen married Velma E. Scheiwe in the same house in rural Milford that he was born, on December 25, 1941 and they were blessed with nearly 78 years of marriage. Velma preceded him in death on October 24, 2019. Survivors include - Dr. Leon (Janet) Carley of South Beloit, IL, Verla Carley of Milford, Bonita Rajala of Watseka, Virginia (Bob) Buhr of Milford, and Kenton (Lisa) Carley of Milford; ten grandchildren, 22 great grandchildren, and two great great grandchildren. In addition to his wife he was preceded in death by his parents, one brother- LaVern Carley, one sister- Dorothy Werkau, one son- Russell Carley, two grandsons- Jeffrey Buhr and Scott Carley, one daughter in law- Shari Carley, and one son in law- Bruce Rajala. Allen spent his childhood in the rural Milford area attending the Prairie Center one room grade school through 8th grade. He attended Woodland High School, Crescent High School, and graduated from Watseka Community High School in 1937. After high school, he graduated from the Utility Engineering Institute in Chicago. Farming was his passion and profession his entire life. He was a director of the Iroquois County Soil and Conservation for several years, charter member of Professional Farmers of America, member of the Farm Bureau, was a drainage commissioner for 30 years, and past member of the Farmers Union. Allen received many tractor pulling awards over the years including 1st place Points Trophy and 2nd place trophy for National Corns Growers Association. In 1953 he organized Little League in Crescent City and coached Little League, Babe Ruth League, and American Legion baseball for many years. Allen was a lifetime member of St. Peters Lutheran Church in Crescent City and active in many organizations within the church especially Men in Mission where he served as President. He was secretary of the Building Committee during the church addition and was the oldest member of St. Peters Dartball Team. Allen became active in golf during his later years and was a past member of Shagbark, Grandview, and Shewami Country Club. Funeral services will be held on Saturday July 10, 2021 at 12 noon at St Peters Lutheran Church in Crescent City with Rev. Joel Brown officiating. Visitation will be from 9:30am to 12 noon prior to the funeral service at the church. Burial will be in St. Peters Lutheran Cemetery. Memorials may be made to Prairieview Lutheran Home, Iroquois memorial Hospice, or donor’s choice.

Allen J. Carley, 101 of Danforth and formerly of Milford passed away on Sunday June 27, 2021 at Prairieview Lutheran Home in Danforth. He was born on June 2, 1920 in Crescent Twp., a son of Adam J. and Ollie C. Smith Carley. Allen married... View Obituary & Service Information

The family of Allen J. Carley created this Life Tributes page to make it easy to share your memories.

Allen J. Carley, 101 of Danforth and formerly of Milford passed...

Send flowers to the Carley family.