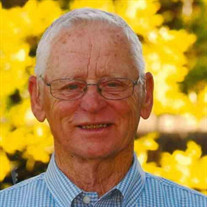 Albert “Jun” Kaufman, 90 of Cissna Park went to be with the Lord on Tuesday August 17, 2021. He was born on October 6, 1930 in Cissna Park the son of Albert and Bertha Feller Kaufman. Jun married his high school sweetheart, Ruby Markwalder on February 4, 1951. She survives her beloved husband of 70 years. Also surviving are one daughter- Kailyn (Mark) Alt of Carmel, IN; one son- Wayne (Jaye) Kaufman of Morrison, CO; eight grandchildren, 39 great grandchildren; one brother- Don Kaufman of Bloomington; one sister- Sal Markwalder of Fairbury. He was preceded in death by his parents; one daughter- Donna Gast; one great grandchild- Grace Alt; seven brothers- Robert, Clyde, William, Ben, Wilmer, Arch, and Calvin; six sisters- Lydia Rocke, Emily Eisenmann, Martha Rinkenberger, Margaret Kaufman, Bertha “Tootie” Sinn, and LaVerne Kaufman. Jun was a member of Christian Bible Church in Cissna Park. He was born again in 1950 and loved serving the Lord Jesus ever since that day. He was active with the church youth group for many years. During his lifetime he enjoyed every aspect of farming, feeding cattle, and selling DeKalb seed. Jun dearly enjoyed time with his grandchildren and great grandchildren. Visitation will be from 4-7 pm on Thursday August 19, 2021 at the Knapp Funeral Home in Cissna Park and one hour prior to the funeral service at the church. Funeral services will be held at 10:30 am on Friday August 20, 2021 at Christian Bible Church in Cissna Park with Pastor Nathan Gast and Pastor Josh Benner officiating. Burial will be in the Cissna Park Cemetery. Memorials may be made to Christian Bible Church Mission Fund or Iroquois Memorial Hospice.

The family of Albert "Jun" Kaufman created this Life Tributes page to make it easy to share your memories.

Albert “Jun” Kaufman, 90 of Cissna Park went to be with the Lord...

Send flowers to the Kaufman family.